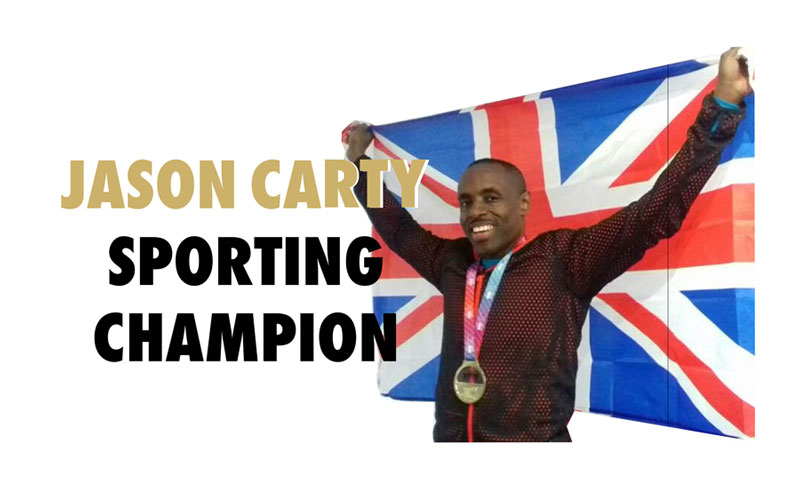 Who is Jason Carty?

In addition to being a world class athlete Jason is an elite coach a mentor.

Jason is known for his Resilient Mentality ( the one lung warrior)- but it’s his big heart that is truly admirable. He is constantly reinventing himself and continuing to pursue new dreams.

I was so thrilled to come interview him!

Sprinter, back to his best after beating cancer

A cancer diagnosis and a speedy return to athletic competition don’t often go hand in hand. This does not, however, take into account sprinter and sporting champion Jason Carty’s determination and self-belief to return to athletics, despite this monumental set back.

In June 2016, thinking he was suffering from an asthma attack, Jason took himself off to the Accident and Emergency department of his local hospital, feeling concerned, but not prepared for what was to come.
Having had chest x-rays done, the doctor told Jason to sit down. They had found shadows or ‘furriness’ around one of his lungs and, after a biopsy, the lung cancer diagnosis was confirmed.

It was quickly decided that, due to the severity of the cancer, the whole of one of Jason’s lungs would have to be removed in order to stop it from spreading any further. Naturally, this was a devastating blow – especially for a top-level athlete.

Thankfully, the surgery went well, ridding Jason of his cancer and setting him on the road to recovery. Both physically and mentally, however, he was at a low ebb. The chemotherapy was making him ill and the pneumonectomy left him breathless.

None of this dimmed Jason’s determination to return to competition, however. Just two weeks after the operation, he set himself the challenge of being able to walk two miles in 10 days and his aerobic capacity began to grow slowly the more he pushed himself. By week four he was walking round the athletics track and, just six weeks after his operation, he was returning to training, working on his acceleration routines, something his doctor wasn’t particularly thrilled about.

To be able to achieve all this in the aftermath of a serious cancer diagnosis, major surgery, the debilitating effects of chemotherapy, as well as all the mental strain he would have been under is quite incredible. The whole episode pushed Jason to the very limits of his mental and physical endurance, but he was able to come out the other side healthy, happy and fit.

Jason says: “Break the Circle and Create a New One.”

Jason talks family, motivation and gives insights strategies to take back control when things are spiralling by breaking the circle and creating a new one.

Note. Since recording this interview Jason was diagnosed with brain tumours and at the cusp of lockdown 2.0 underwent surgery – Posterior fossa craniotomy. We are sending him love and positive energy for a speedy recovery and will be welcoming him back for more insights in the near future.

Take Me to the Webinar!

Thanks for signing up! I'll be able to keep you updated with my upcoming retreats, workshops, webinars, and special events.

I use cookies to ensure that I give you the best experience on my website. If you continue to use this site, I will assume that you are happy with this.AcceptRefusePrivacy policy
Revoke cookies